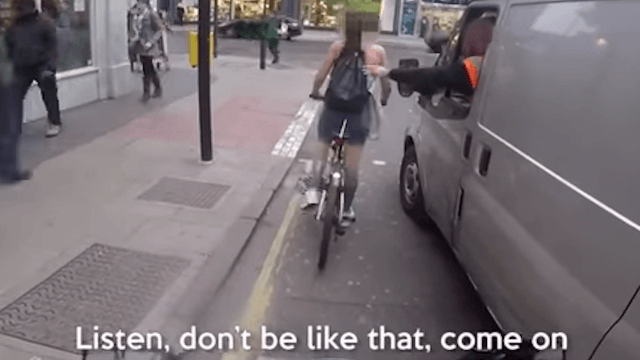 Bicyclist gets serious revenge on catcallers who wouldn't leave her alone.

These catcallers have found the wrong target. In this video, posted by a guy on a motorcycle with a GoPro camera attached to his helmet, a woman on a bike being hassled by two guys in a van gets some sweet, sweet revenge.

As you can see in the video, the men start hassling the woman stopped at a streetlight. When she doesn't react how they want (what was she going to do, give them her number?), they have the audacity to ask if she's on her period. The driver even reaches out a few times to touch her! Jesus, man, what is wrong with you??

The light changes and the van drives off, but now the unidentified woman is PISSED (and who can blame her). She chases down the van, and as they pull over to park, she stops for a moment and—well, watch for yourself!