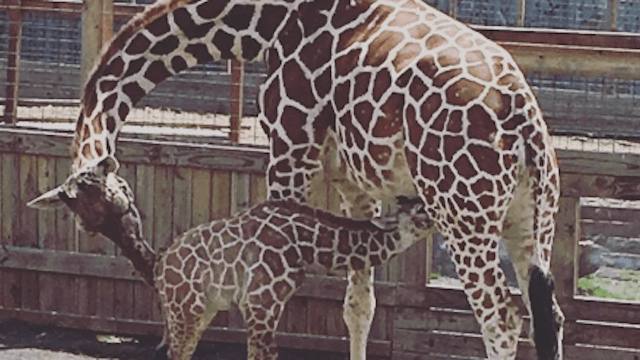 April the giraffe's baby finally has a name and it's not Harambe.

Ah, it seems like just yesterday we were compulsively watching a very pregnant April the giraffe pace around her pen for hours on end, and now the time has finally come to learn viral star's baby's name.

Today is the day..."Baby" will have a name! Just 4 short hours before Voting ends at 6 PM Eastern! Www.nameaprilscalf.com Contributions support Giraffe Conservation, Ava's Little Heroes (provides financial support for families of children with medical expenses), and Animal Adventure. Popular vote will be honored and announced Monday - May 1st! Comment below with your name of choice from the top 10! Photo taken yesterday after yard time Photo Not for reuse

April's pregnancy captivated the internet for months before the 15-year-old giraffe finally delivered a male calf on April 15th. Following the birth, a contest was held to name the new addition.

The top five names came down to:

Ultimately, voters decided to let Alyssa, a zookeeper who looked after April, choose the name of her calf. The name was announced Monday morning on Good Morning America, and, appropriately, via Facebook livestream.