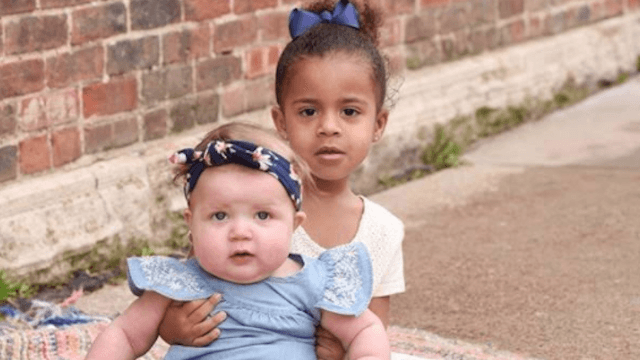 Biological sisters who look nothing alike go viral by proving genetics is cray.

Look at these two cutie sisters. No, these two girls aren't adopted or half-sisters, —they are full sisters, who, due to the weirdness of genetics, just happen to have different skin tones. Willimina (the older girl) and Valentina (the lil' baby) have the same parents but they came out looking different from each other. That's how science sometimes works.

Pictures of this family were posted on Facebook's popular "Love What Matters" page, along with a caption written by the girls' mom.

She explained that when Willimina was born, everyone said she looked just like her dad, Cortez. So when they were expecting Valentina, their second child, she joked that maybe this baby would look just like her. But she says, "Never in a million years would I have guessed she would be born with fair skin, auburn hair, blue eyes, and truly my mini me." Apparently the only difference the older girl sees between herself and her baby sister are those "big chunky cheeks."