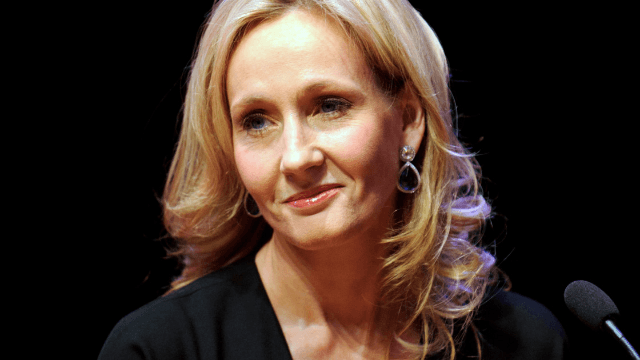 J.K. Rowling begs fans not to buy a stolen short story you desperately want to read.

J.K. Rowling retweeted a police report after an extremely rare, handwritten draft of her Harry Potter prequel was stolen from its owner after selling for £25,000 at an auction in 2008, according to TIME.

The story, penned personally by @jk_rowling over 2 sides of an A5 postcard is extremely valuable & stolen during a burglary in #KingsHeath pic.twitter.com/Aio04lVjFt

PLEASE DON'T BUY THIS IF YOU'RE OFFERED IT. Originally auctioned for @englishpen, the owner supported writers' freedoms by bidding for it. https://t.co/ljEQyyj9yY

"PLEASE DON"T BUY THIS IF YOU'RE OFFERED IT," shouted Rowling to her 10 million-plus followers. The story, written on a postcard by Rowling herself, was sold to benefit English PEN, a center that works to defend freedom of expression for writers.

But look, you don't have to buy this black market postcard to read the Harry Potter prequel you're desperate for. According to reports from 2008, the prequel was made available to fans online around the time of the postcard sale, and now it's widely circulated on Potter fan sites.