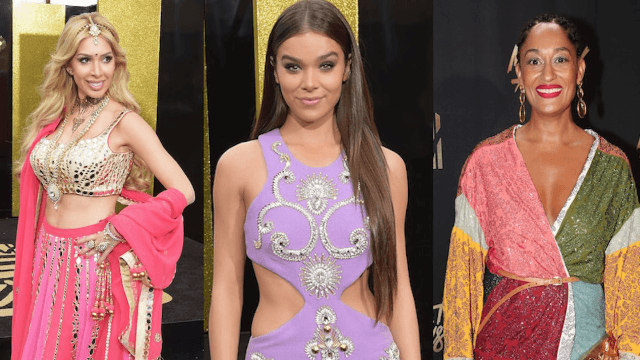 The best, worst, and most in-between looks from the 2017 MTV Movie and TV Awards.

On Sunday night MTV hosted their 26th annual Movie and TV Awards—but this year marks the first year that the awards categories were gender-neutral. Progress!

Despite the rain, the celebs came out in all their finery…and a few in their "what"-ery. Take a look below to check out some of the best and worst looks of the night. And remember: never trust my opinion on best and worst looks because I've been wearing the same grey hoodie every day since 1947.

The teen mom showed up in costume as Ms. Cultural Appropriation 2017, wearing a Bollywood-inspired look, complete with maang tikka, a head accessory typically worn by Indian brides. (ASOS was raked over the coals for selling earlier this year as a "chandelier hair clip.") Abraham told TooFab she "wanted to bring culture to the red carpet" and wasn't worried "at all" about cultural appropriation backlash from the Internet, saying, "I think this will inspire others to embrace new cultures and have good experiences." Mm-hmm.