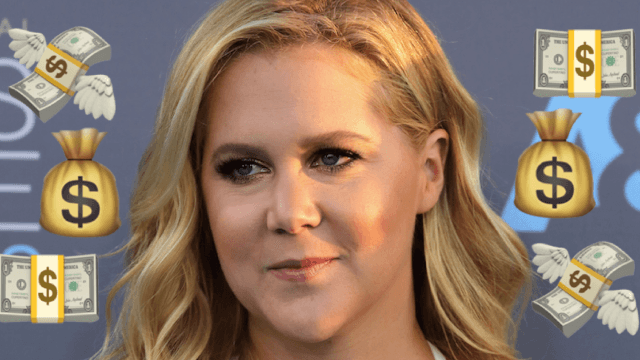 Amy Schumer leaves $500 tip at an oyster house, puts all other diners to shame.

Amy Schumer, who once bought a $2,000 mattress for an employee who let her use the bathroom, has done it again. While dining at the The Union Oyster House in Boston, the comedian dropped a casual $500 on top of her $80 bill.

Amy Schumer's server, when she saw her tip.

As reported by People, Schumer is in Boston shooting a film called I Feel Pretty. She was allegedly dining with ~an unidentified male~ when she slapped down the 500 buckeroos. A generous tip and a power play? Love it.

People spoke with the restaurant to confirm that Amy Schumer really visited and left such a tip. “She was very nice,” Joe Milano, who owns The Union Oyster House, told People. “She said to [the server] that she was once a waitress and knew how hard it was.”

“She was dressed very casually – a baseball cap, sunglasses, no makeup … it seemed like she didn’t want to be recognized,” Milano continued. “It was early, like 5:30 or 6, so it wasn’t busy, but we sat her in a back dining room area that wasn’t being used so she had her privacy.” Milano also mentioned that the waitress who received the tip is a college student who was over the moon. He told People: “She was excited to be serving her, but then to get that kind of a tip was something else...She’s a hard worker and I’m happy for her.”