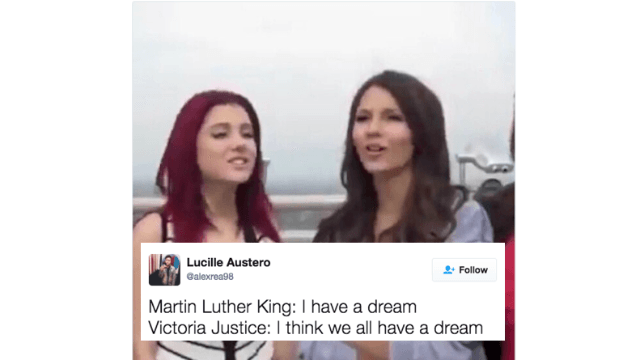 For some reason, an old interview with the cast of Victorious, a Nickelodeon TV series that ran from 2010 to 2013, has resurfaced. You might recognize one of the stars in the series, Ariana Grande, who is now a pop superstar. It turns out that back then, before her signature ponytail, she was already a pop star in the making, singing at any chance she got. And that's what the interview is all about.

The cast is speculating on which of the four girls is most likely to burst into song spontaneously, when Elizabeth Gillies, who played Jade West on the show, says that it's definitely Ariana. "One thing you don't know about Ariana Grande is that she literally sings everything. She's starting to forget how to talk in her own voice, because she sings everything. And it's a good thing, because she has a beautiful voice. But it's awesome. She sings absolutely everything. She never stops," Gillies says to the camera.