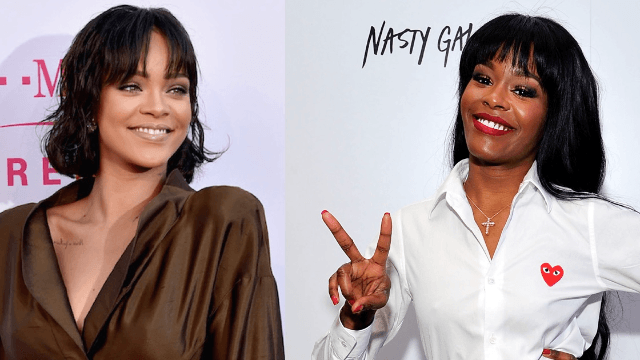 Azealia Banks defends Trump and incites feud with Rihanna: "shut up and sit down."

Azealia Banks may be banned from Twitter, but she is still using other social media channels to start fights with people who are much more famous than her. According to People, Banks most recently clashed with Rihanna over Donald Trump's unconstitutional travel ban that targets Muslims.

On Sunday, Rihanna tweeted her feelings on the ban to her 69+ million followers.

Disgusted! The news is devastating! America is being ruined right before our eyes! What an immoral pig you have to be to implement such BS!!

Of course, Banks, one of Donald Trump's few "celebrity" supporters and professional provocateur, went after Rihanna by writing (and subsequently deleting) this rant:

As far as rihanna (who isn’t a citizen, and can’t vote) and all the rest of the celebrities who are using their influence to stir the public, you lot really REALLY need to shut up and sit down. Stop chastising the president. It’s stupid and pathetic to watch. All of these confused people confuse other confused people. Hoping the president fails is like getting on an airplane and hoping the pilot crashes. What makes you think, the the USA is going to enter the Middle East destroy a bunch of shit and pull out without any real repercussions ????