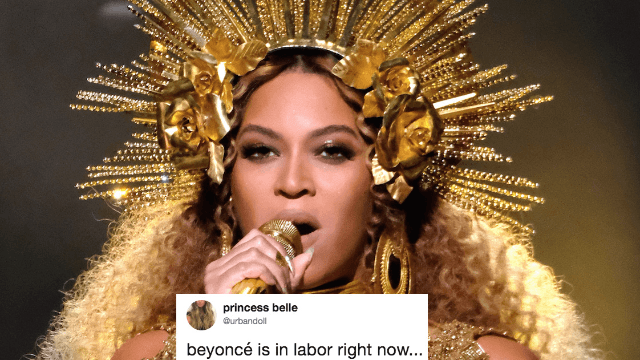 The Beyhive thinks Beyoncé has given birth to the twins. Here are the reasons why.

If you, too, have been waiting with baited breath for Beyoncé to give birth to the newest members of America's royal family, the wait might soon—or already—be over.

Though there has been no official news about the state of Bey's womb, members of her loyal fan-base on Twitter seem to think that the birth of Bey's twins is imminent. Either that, or it's already happened.

Remember when Lemonade dropped last year and NO ONE saw it coming? If anyone could pull off a secret birth and keep it from the public, it would be Mr. and Mrs. Beyoncé.

So where do these rumors that the Bey Beys have already been born come from? It seems they can be traced back to these three clues:

But maybe they were just going on a day trip?

2) Someone claiming to work at UCLA hospital anonymously submitted a report to The Shade Room that Bey had arrived at the hospital and they were in the process of shutting down an entire floor for her.