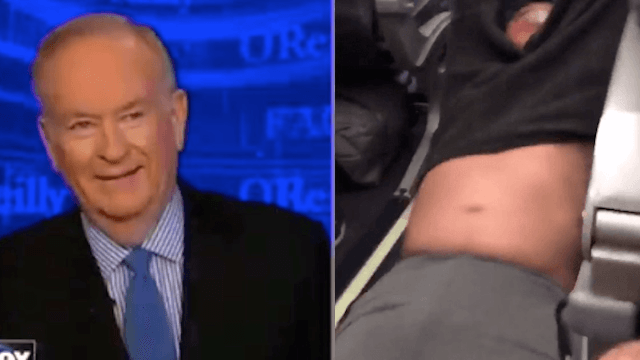 A giggling Bill O'Reilly had the worst take on that United passenger being dragged off a flight.

Leave it to Bill O'Reilly to laugh at something awful. On Monday night, the Fox News host talked about the now infamous clip of a doctor being dragged off an overbooked United Airlines flight. As he watched the clip, O'Reilly laughed (laughed!), while telling Fox News correspondent Rob Schmitt, "I shouldn't be laughing, but it's just so bizarre."

Bill O'Reilly laughs at horrific video of passenger being dragged off of United flight. Then says: "I shouldn't be laughing"

It was definitely bizarre, but nothing about it was funny. According to Business Insider, O'Reilly didn't stop there. "They had to get some United Airlines personnel from Chicago to Louisville. . . they had to get them there, and so they asked for volunteers, and obviously, this guy didn't volunteer," Bill O'Reilly said, while still laughing.