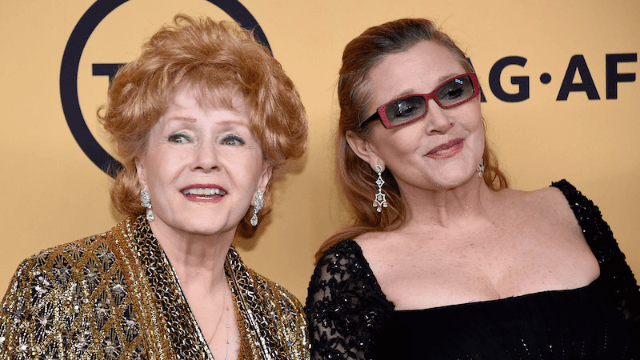 What to expect and how to watch the Carrie Fisher and Debbie Reynolds memorial service today.

Starting at 1pm PST today, fans can watch a live-stream of the public memorial service for Debbie Reynolds and Carrie Fisher, which will take place at Forest Lawn-Hollywood Hills cemetery, LA Times reports. People will be seated at the service on a first-come, first-serve basis, and the live-stream is available at www.debbiereynolds.com.

The memorial will feature music honoring the duo by James Blunt and Star Wars composer John Williams, and will have present the Hollywood memorabilia that Reynolds collected throughout her life.

Since the two died in late December, many touching reflections on the lives of the mother-daughter pair have surfaced, and today is sure to be an emotional tribute. Their nearly tandem deaths left the world stunned and gutted, and today is a beautiful opportunity for the public to share their tributes to them. According to the LA Times, Todd Fisher, Carrie's brother and Debbie's son, "organized Saturday’s memorial to give fans an opportunity to honor his mother and sister." He also revealed a few days ago that Debbie's final wish in the wake of Carrie's death was for "permission" to go and be with Carrie. Grab the tissues and tune in for what will surely be a moving tribute to their lives.