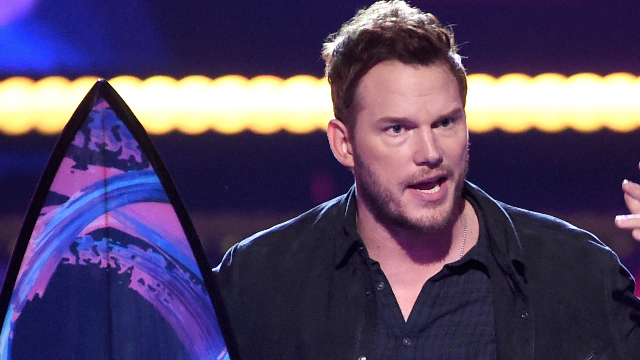 It looks like Chris Pratt has already stopped wearing his wedding ring.

Just one week after announcing that he and his wife Anna Faris are separating, Chris Pratt is already making public appearances without his wedding ring.

On Sunday evening, the actor attended the Teen Choice Awards, where he accepted the award for Choice Movie Actor: Sci-Fi for his performance in Guardians of the Galaxy Vol. 2. His left hand was exposed, plain as day, showing off a completely ring-free hand.

Now, you might be thinking, "Maybe Chris Pratt is just one of those people who never wears a wedding ring! Sometimes actors don't wear wedding rings because they would just have to take it off on set every day!"

No. He's not one of those people. A Getty Images search reveals that he's worn his wedding ring to pretty much every photographed event over the past year, from Passengers press events to the Guardians Of The Galaxy Vol. 2 premiere to the ceremony honoring his star on the Hollywood Walk Of Fame. One event where he opted not to wear the ring? His last public appearance before the Teen Choice Awards, at the Ingrid Goes West premiere party on July 27. The event, where he reunited with Parks and Recreation costars Amy Poehler, Aubrey Plaza, and Retta, was just a week and a half before he and Anna Faris announced their separation.

At the Teen Choice Awards, Pratt began his acceptance speech with an interesting tale from his early Hollywood days.