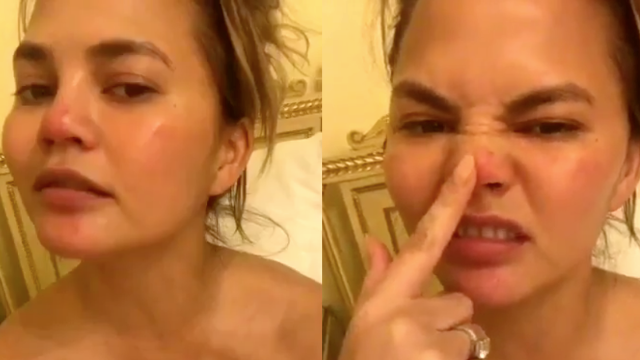 At first glance, one might poo poo the idea that Chrissy Teigen could be relatable: She's married to John Legend, she's an unbelievably gorgeous model, she's super rich, et cetera. But then she goes and posts on social media and reminds us all that she's one of the most relatable celebs on the internet (and the planet, tbh).

Monday night, Teigen Snapchatted a video of herself showing off her "period skin," a.k.a. her face experiencing redness during her period. "This is my skin on my period. Look at it. So angry," she pouts to the camera in the clip, which she also shared to Twitter. "Ow," she adds, after poking herself in the nose. Every menstruating human experiences different symptoms during their period, and skin redness just happens to be a side effect of Teigen's period.

Period skin is a thing, y'all!

Also, it's pretty unfair that Chrissy Teigen still looks so good, even with a rash on her face. And is it just us, or does her headboard look like it's made of gold?