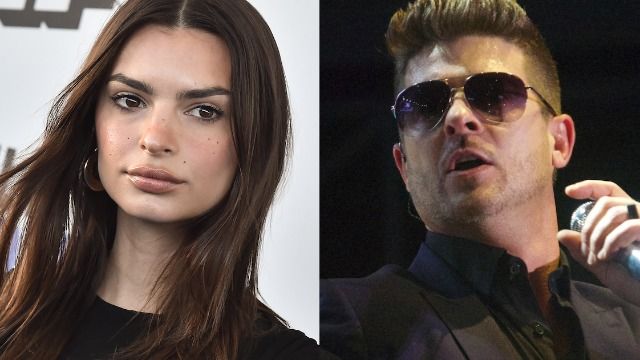 Emily Ratajkowski accuses Robin Thicke of groping her during filming of 'Blurred Lines.'

Model and actress Emily Ratajkowski alleges that singer Robin Thicke groped her breasts while they were filming the 2013 video for his song Blurred Lines, the Sunday Times of London reports. Ratajkowski, who was one of three semi-clad models to appear in the video, makes the allegations in her memoir My Body, which is scheduled to be published next month.

"Suddenly, out of nowhere, I felt the coolness and foreignness of a stranger's hands cupping my bare breasts from behind," writes Ratajkowski in the book, according to the Times. "I instinctively moved away, looking back at Robin Thicke."

She continues: "He smiled a goofy grin and stumbled backward, his eyes concealed behind his sunglasses. My head turned to the darkness beyond the set." She writes that she felt "humiliation" but "didn't react," adding: "not like I should have." She also says that the video's director, Diane Martel, yelled out to her: "are you OK?"