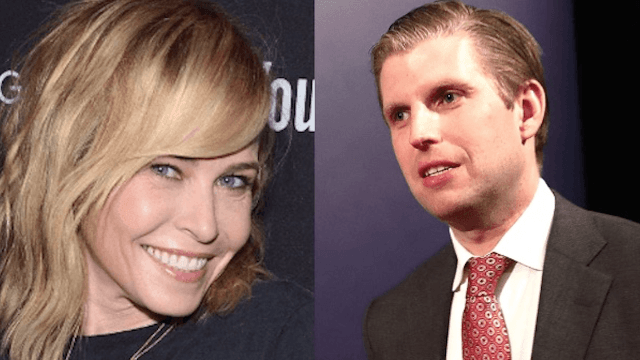 Eric Trump is mad at Chelsea Handler, just wishes people could be nice on Twitter.

Because the apple doesn't fall far from the orange, Eric Trump is still mad about a Chelsea Handler tweet from March, and is taking every opportunity to rehash it.

Renowned leopard-killer Eric Trump appeared on The Dr. Oz Show with his pregnant wife Lara to talk about puppy mills, a newfound passion as President Donald Trump purges all animal welfare data from the U.S. Department of Agriculture's website, as TIME.com reports.

In March, after Eric Trump announced that Lara is expecting, Chelsea Handler was rattled by another link in the Trump dynasty and tweeted her hope that the new baby wouldn't be a boy who'll engage in locker room talk.

I guess one of @realDonaldTrump's sons is expecting a new baby. Just what we need. Another person with those jeans. Let's hope for a girl.