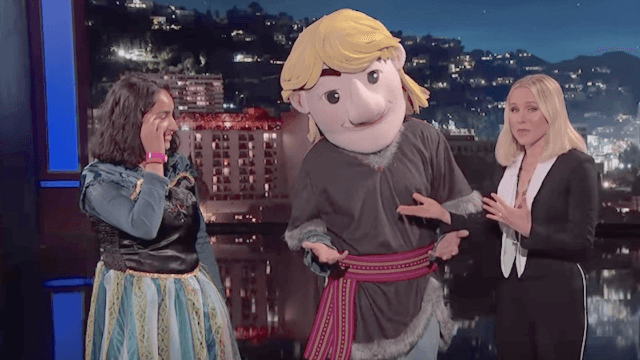 Are we over promposals yet? Maybe, but this one is pretty damn cute. While guest hosting Jimmy Kimmel Live! on Thursday night, Kristen Bell helped pull off a pretty amazing Frozen-themed promposal.

Bell randomly selected two young women from the audience and said that she would give away Frozen-themed prizes to whoever went outside the studio and brought back the person dressed in the Kristoff costume first. After the two ladies left, Bell fessed up—one of them was an actor, and the other was part of an elaborate secret promposal planned by a fellow student named Michael who liked her. He got Kristen Bell involved, they roped in Sara's parents, and voila—Michael promposed to his crush Sara in front of millions of viewers, with the help of Bell's gorgeous voice and funny lyrics. And did she say yes? Gotta watch the video to find out!