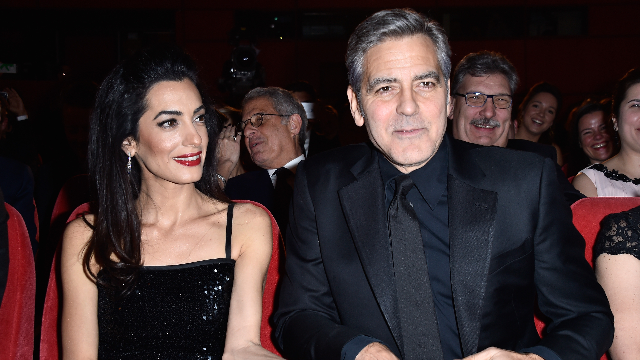 George Clooney and Amal Clooney have been pretty private about both their relationship and about their newborn twins, Alexander and Ella. But now that the kiddos are about three months old, all the parenting is evidently getting to George and Amal, and they're cracking. The power couple has started to reveal some more tidbits about their private life, including how they found out they were having twins and how they first got together.

In a new interview with The Hollywood Reporter, George Clooney revealed that he and Amal didn't discuss whether or not they planned to have kids until they were married. "It had never been part of my DNA," the actor told The Hollywood Reporter. "We didn't plan on it. We never talked about it until after we were married, which is funny. There was an assumption that we didn't want them. And then, after the wedding, Amal and I were talking and we just felt we'd gotten very lucky, both of us, and we should share whatever good luck we've got. It would seem self-centered to just have that belong to us."