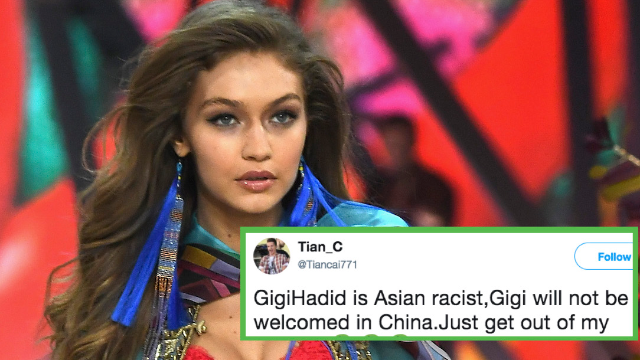 Gigi Hadid is no longer welcome in China, according to a report from Evening Standard. Back in February, Hadid sparked an online backlash when she appeared in her sister Bella's Instagram video "mocking" Buddha. The short video shows Hadid squinting her eyes cartoonishly while holding a miniature Buddha cookie. While the video itself is brief, it's clear that Hadid was mimicking the Buddha in an offensive and painfully predictable way.

this is y'all woke palestine queen? Gigi out here mocking Asian people. i would say she's cancelled but she never started. rat @GiGiHadid pic.twitter.com/b6wj5k1sXE

When the video first came out, Hadid's boyfriend Zayn Malik, who is Southeast Asian jumped to her defense on Twitter. "Trust me...she likes Asians ;)" he wrote.

As you can imagine, a good handful of people on Twitter didn't think his response was cute. Since, you know, sleeping with or dating someone of another race doesn't absolve someone of racist behavior.