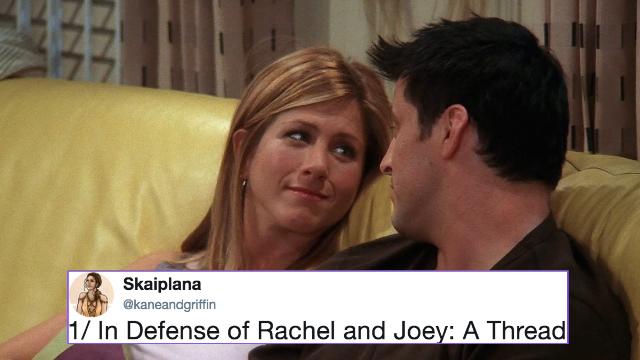 Jennifer Aniston replies to that viral 'Friends' theory that Rachel and Joey were each other's lobsters.

Even though the Friends characters Ross and Rachel have become a ubiquitous standard of true love in the pop culture lexicon, a very convincing theory that Rachel should have ended up with Joey went viral earlier this month. A staunchly anti-Ross Geller fan of the show shared a 100 tweet thread explaining why Ross was all wrong for Rachel, and why she and Joey were actually perfect together. And the argument convinced plenty of Friends fans that, OMG, Joey and Rachel actually were great together.

However, the woman behind Rachel, Jennifer Aniston, just swooped in with her thoughts on the matter. In a new interview with Elle, Aniston was asked about the viral theory. "Any chance you secretly wish Joey and Rachel had made it?" the magazine asked her. Unfortunately for proponents of the theory, Aniston was quick to shut. it. down.

No! No, no. They tried! I think there was a moment when Joey and Rachel got together that maybe it could happened, but it didn't. It was Ross and Rachel all the way. I really believe that if there's an afterworld of Friends, they're still thriving. Don't you? I just don't think Joey and Rachel could have made it. I think it was more physical than emotional with them. They were friends with benefits, and they left it at that.