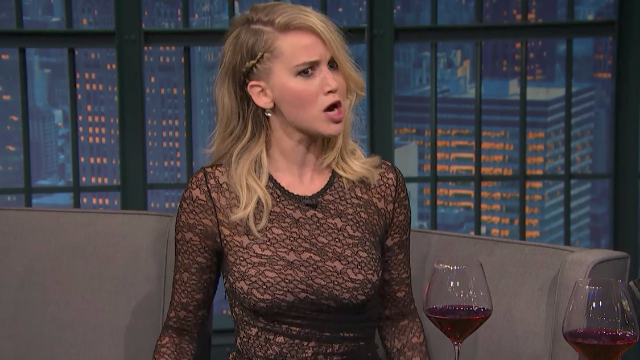 Jennifer Lawrence got into a messy bar fight with an aggressive fan. Don't mess with J-Law.

You might want to think twice before persistently asking Jennifer Lawrence for a selfie. Especially on beer night.

A very tired, possibly hungover J-Law stopped by Late Night with Seth Meyers on Thursday night. In addition to talking about her new film, Mother! and confessing her fear of the movie, A Haunting In Connecticut, Lawrence told a story about the time she got into a bar fight in Budapest.

Lawrence was in Budapest earlier this month filming the upcoming movie, Red Sparrow. One night, she and some friends were partaking "beer night" at a local bar when a fan came up to her and asked for a selfie.

"I was drunk, which is rare" Lawrence joked before launching into her story. "This guy asked me for a selfie and I was like, 'No. Thank you. No.' He was like, 'Please! My girlfriend will never believe me.' My friend was like, 'If your girlfriend won't believe you then she's not The One."