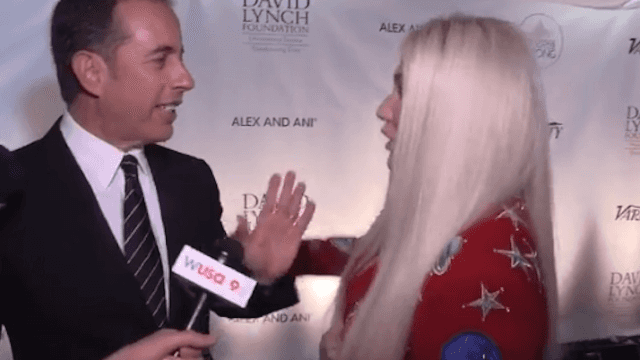 Jerry Seinfeld rejected a hug from Kesha three times in a row. It was pretty awkward.

As it turns out, Jerry Seinfeld is not a hugger. Pop star Kesha learned this on Monday night, when she interrupted Seinfeld while he was being interviewed and he rejected her request for a hug three times. Yeah, it's pretty awkward.

They were at the Kennedy Center in Washington, D.C. for the National Night of Laughter and Song, according to Billboard.

In the video (taken by radio host Tommy McFly, who was the one doing the interview), Kesha comes up to Seinfeld and says "I'm Kesha, I love you so much! Can I give you a hug?"

Seinfeld is definitely not into and says, "No thanks" (politely) but she tries again, asking "Please?" Still no, but she tries once more: "A little one?" DENIED. Ouch. He even starts to move away from her, like he thought maybe she was some rando on the red carpet?