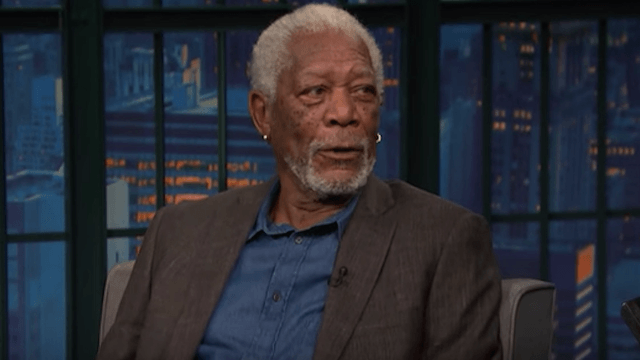 Morgan Freeman is so sick of doing this one thing people ask him to do.

If there is one thing Morgan Freeman is known for, it's his silky smooth, perfect voice. The actor was a guest on Late Night with Seth Meyers on Wednesday night, where he told the story of how he lost a bet with Zach Braff and had to record his voicemail greeting. And it turns out that Morgan Freeman is really, really sick of recording other people's outgoing voicemail messages for them.

"It gets exhausting," Morgan Freeman said to host Seth Meyers. "I can't tell you how many times I've said, 'Hello, this is so-and-so, he's not willing to come to the phone right now.'

Seth Meyers kindly offers to record Morgan Freeman's voicemail greeting, but Freeman declines, explaining that he's got the "perfect" voicemail greeting right now—the guy who set up his voicemail system, "a Southerner with the most Godawful Mississippi drawl you ever heard." Apparently he was testing the system and left a simple greeting saying, "Hello, leave a number." And Freeman decided to stick with that greeting, because people think they've reached the wrong number, and it discourages them from leaving messages, which he "ideally" doesn't want them to do. Just like the rest of us.