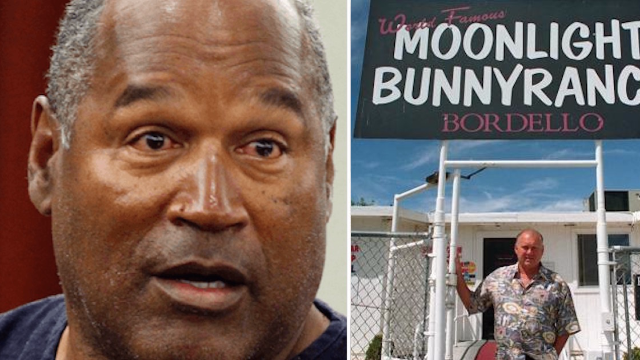 O.J. Simpson offered job at a brothel and some sex workers threaten to quit.

O.J. Simpson has not even been released from prison yet and already he has a job offer. Dennis Hof, the owner of a brothel in Carson City, Nevada wants the Juice to be the greeter at his establishment, called the Moonlite BunnyRanch and schmooze with guests, TMZ reports.

It's not clear if the position (ahem), which does include room and board, also includes, um, side benefits. But either way, some of the employees at the BunnyRanch are threatening to quit if Simpson is hired.

It'd be a great gig for Simpson, due to be released as early as October 1, especially due to the aforementioned invitation to live on the grounds. Hof told TMZ:

"One of the conditions of a prisoner being granted parole is always having an established place to live and a job to go to, and I can offer O.J. both of those in a unique situation."