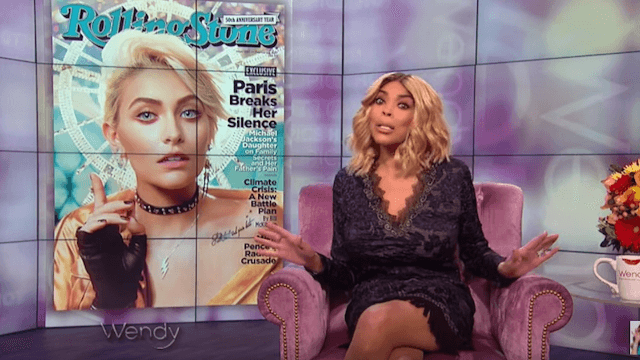 Wendy Williams came for Paris Jackson over 'black' comments but Michael Jackson's daughter is not having it.

Paris Jackson, daughter of the legendary Michael "King of Pop" Jackson (perhaps you've heard of him), is on the ​​​​​​cover of the February issue of Rolling Stone, which includes an intimate and revealing interview with the 18-year-old. In the interview, among other things, Jackson says she considers herself black, because her father was black.

I consider myself black. [My dad] would look me in the eyes and he’d point his finger at me and he’d be like, ‘You’re black. Be proud of your roots.’ And I’d be like, ‘OK, he’s my dad, why would he lie to me?’ So I just believe what he told me. ‘Cause, to my knowledge, he’s never lied to me.

Well, this did not sit right with talk show host Wendy Williams, who on Thursday gave her thoughts on the matter, which can basically be summed up by saying: A. Paris Jackson hasn't done enough on her own yet to warrant her own Rolling Stone cover and B. black is not what you feel you are, but what the cops see when they pull you over.