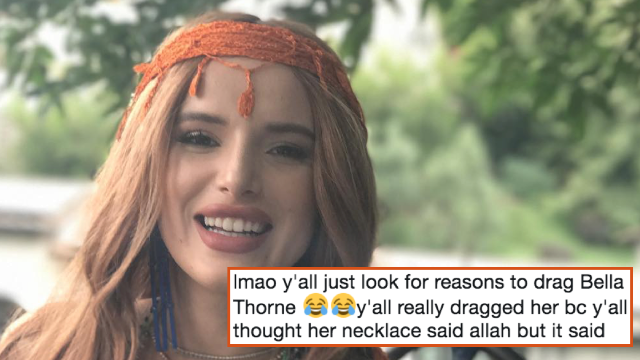 From being accused of posting her ex's nudes to partying with Scott Disick, actress Bella Thorne has been the subject of oh-so-many rumors on social media. But this time around, the internet has caused a Bella Thorne-inspired stir for something a little ... sluttier.

As pointed out by Teen Vogue, Thorne recently shared a selfie to Snapchat, featuring colorful hair, thick eyebrows, and a collection of necklaces. At first glance, it's a standard celeb selfie. But the internet never takes just one glance. No, the internet scrutinizes everything, and with this photo, the internet decided to get angry over a heart-shaped necklace she is wearing in the photo, which sort of looks like it says "Allah" (the Arabic word for God) in Arabic on it.

Thorne caught wind of the uproar (which was mostly contained to the Instagram account @shadingcelebs), and happily set the record straight by leaving a comment. "It actually says 'slut'..." she wrote. That's right – not only does her necklace not actually say Allah, but it says SLUT.