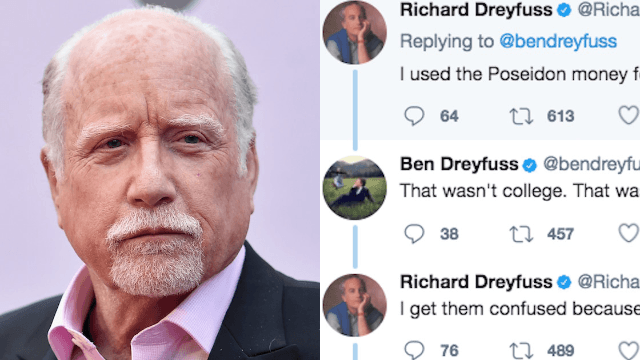 Richard Dreyfuss and his son win Twitter with hilariously TMI convo about money and rehab.

Richard Dreyfuss is a well-known actor, the star of canonical films like Jaws, and not Julia Louise-Dreyfuss' late father (RIP). He also has three kids, including a son named Ben Dreyfuss who is an actor, journalist, and very, very funny on a popular website called Twitter.com.

He's also big on overshares. For example, he recently got into a hilariously TMI discussion with his dad on Twitter (a public website) about two subjects people don't usually discuss in public, if at all: 1) Money, and 2) Rehab. And tbh, I applaud them for it.

It all started with this very funny tweet about the movie Jaws, which his dad, Richard Dreyfuss (reminder: NOT Julia Louise-Dreyfus' dad), starred in.

Young Dreyfuss declared Jaws his favorite Spielberg movie because it helped his dad pay for him to go to college.

His dad (still Richard Dreyfuss), however, remembered things a little differently, and he decided to weigh in. This led to what may be the single greatest father-son Twitter thread of all time. Enjoy:

I used the Poseidon money for your college.

I get them confused because neither took.

Then Tim got involved. Who's Tim? You'll find out in a second:

Ben knows that the answer to this question is no, because though I support him, I am an old Jew and old Jews don't ride bikes.

But Ben is not convinced:

Twitter is dying over this thread. Some are calling it the best father-son Twitter exchange of all time.

This thread is now my favorite Richard Dreyfuss movie.

And others are saying this thread has restored their faith in Twitter:

I agree. Wanted to delete Twitter today after 🍊contamination but then this thread.

Journalist Yair Rosenberg declared this thread the reason Twitter is "still worth it." And others seem to agree, because his tweet went viral:

This is why, despite everything, Twitter is still worth it: pic.twitter.com/851EsTAHYI

For some people, when life gets tough, their rich, actor dads can send them to college and rehab. For the rest of us, there's Twitter.