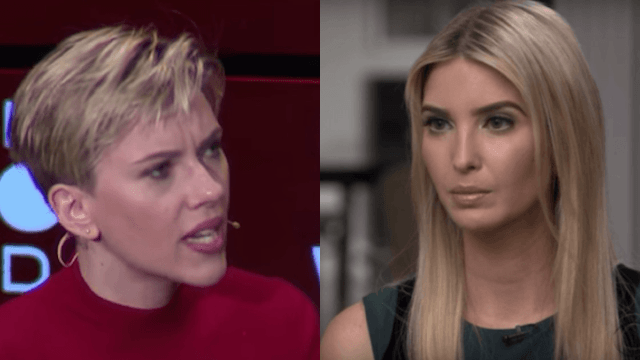 Scarlett Johansson speaks out about 'cowardly' Ivanka Trump and doesn't hold back.

Actor Scarlett Johansson is not holding back when it comes to her feelings about Ivanka Trump. On Thursday, during a Q&A with Arianna Huffington at the Women in the World Summit in New York City, Scarlett Johansson said of Trump, “If you take a job as a public advocate, then you must advocate publicly. You can’t have it both ways.”

Johansson, who recently portrayed Ivanka Trump in a parody commercial for "Complicit perfume" on SNL, was referring to Trump's interview with Gayle King on Wednesday. She called that interview "disappointing," and said she found Trump's political stance "baffling." During that interview, Ivanka Trump claimed that she would be “advocating for the economic empowerment of women,” but that her work would mostly be behind-the-scenes. Trump explained, “I think most of the impact I have over time most people will not actually know about."