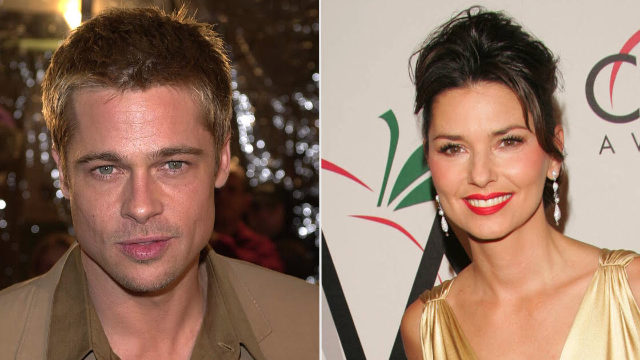 Shania Twain says Brad Pitt's nudes were the inspiration for one of her most famous songs.

For the past 20 years, Brad Pitt has been walking around with his head held high thanks to his shout out in Shania Twain's 1998 song "That Don't Impress Me Much." (Or maybe thanks to his career as a movie star or his marriages to Jennifer Aniston and Angelina Jolie, IDK.) Well, Shania Twain just shared a story that just might take Pitt down a notch.

In an interview with Billboard at Spotify HQ, Twain decided to unearth the complex history behind the iconic lyric, "Okay, so you're Brad Pitt/That don't impress me much."

When asked about her choice to mention Brad Pitt in the song, Twain told the crowd:

You want to know the truth about this story? I've never told this before. I'm going to say it now...I remember I had a girl friend visiting me and it was near Christmas and we were baking cookies. I was writing this album and there was a scandal of [Pitt] and Gwyneth [Paltrow] where there was naked photos of him [in Playgirl magazine, which Pitt later successfully sued for publishing the paparazzi photos]. And this was like all the rage. I just thought 'I don't know what all the fuss is about.' I'm like, well that don't impress me much, I mean what is all the fuss. We see people naked every day. That's really what I thought. I wasn't picking on Brad Pitt. But that was just the association in that moment and things we make fusses about and whatever. Of course, it could have been any gorgeous guy.