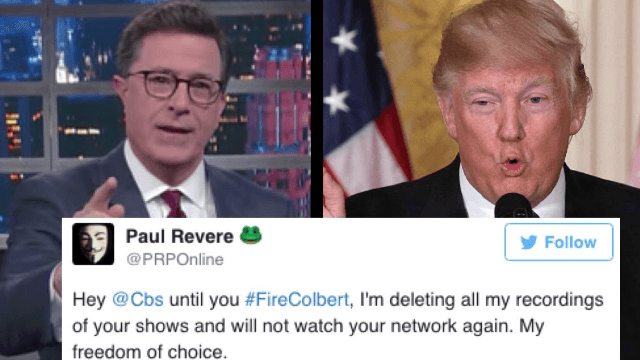 People want Stephen Colbert to be fired after making this 'homophobic' joke about Donald Trump.

Trump supporters on Twitter are calling for Stephen Colbert to be fired after the late night host made a joke about President Donald Trump on Monday that some of them consider to be homophobic.

Stephen Colbert hurled plenty of insults at Donald Trump in a segment titled "This Monologue Goes Out To You, Mr. President," which skewers Trump for insulting Face the Nation host John Dickerson. But it is one particular d*ck joke that had Trump supporters fuming.

"Sir, you attract more skinheads than free Rogaine," mused Colbert in his typical anti-Trump fashion. "You have more people marching against you than cancer. You talk like a sign language gorilla that got hit in the head. In fact, the only thing your mouth is good for is being Vladimir Putin’s c*ck holster."