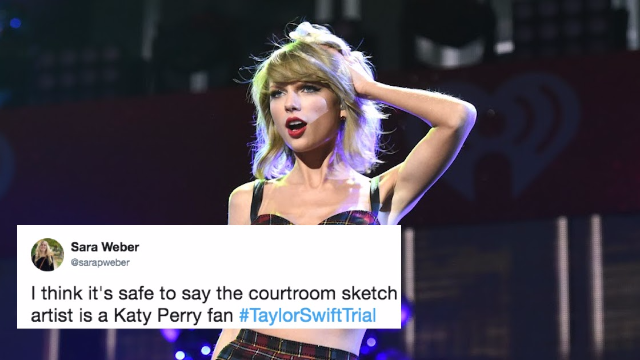 The first Taylor Swift courtroom sketch is out. She looks so bizarre, Twitter can't handle it.

As we speak, Taylor Swift is on the stand in a Denver courtroom for a sexual assault lawsuit that dates back to 2013.

Swift is suing DJ David Mueller for allegedly groping her inappropriately. She describes the incident as: "[Mueller] reached up under my skirt and grabbed my ass right when I was having to pose for a photo."

This isn't the lawsuit's first life — in fact, Mueller sued first, as he claims that Swift's allegations cost him his job. Now, it's Swift's turn to reach for justice in what has become a closely-watched trial.

Naturally, there aren't any pictures from the courtroom. Instead, a sketch has been released. Swift looks... not quite right. The blonde bangs are there, but she somehow looks both evil and dowdy. Her brows are arched like she has a secret she'd rather not share with the class. The all-over confusing sketch has fans wondering: Did Katy Perry draw this, or what?