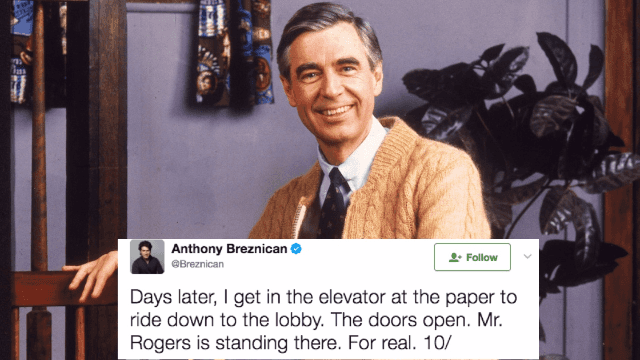 Writer shares story of the time 'gentle soul' Mr. Rogers helped him and now you're crying.

In the wake of a deadly terrorist attack at an Ariana Grande concert in Manchester, England, Fred Rogers' famous "helpers" quote has been circulating around the internet.

A lot of people are sharing this quote after the heartbreak in Manchester. It's also the 50th anniversary of Mr. Roger's Neighborhood. 1/ pic.twitter.com/zDnTrTcJ8v

Writer Anthony Breznican knows first hand that Mr. Rogers' "gentle soul" was not an act. In honor of the 50th anniversary of Mister Rogers Neighborhood, and perhaps to help us all deal with yet another act of terrorism, Breznican shared a story about the time he met the man himself in a college elevator in a Twitter thread late Monday night.

Fred Rogers was the real thing. That gentle soul? It was no act. 3/

Breznican recalled a stretch in college when he was having a particularly rough time.