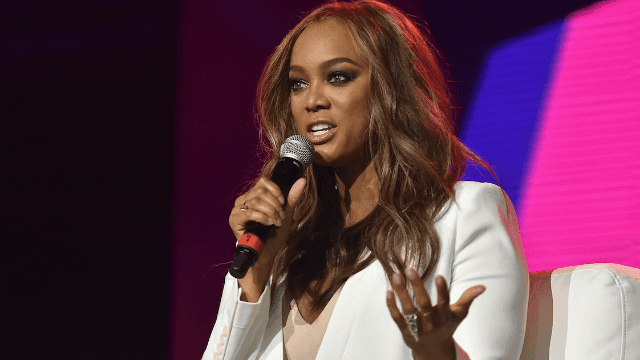 Tyra Banks accused of 'humiliating' a young girl on 'America's Got Talent.'

Tyra Banks recently joined the America's Got Talent panel of judges, and it seems she may have gotten a little carried away. A contestant is suing the show's production company after Banks allegedly "humiliated" her daughter.

According to Deadline, the lawsuit was filed in Los Angeles Superior Court on Tuesday by a contestant on the upcoming season of America's Got Talent, identified as Jane Doe. The suit alleges that the contestant and her husband, a musical duo, were "publicly humiliated" by the America's Got Talent judges and the audience during their performance on March 19. The couple had their young daughter with them, identified as Mary Doe in the lawsuit, and allege that Tyra Banks "physically manipulated and verbally abused" her.

Banks shook Mary’s shoulder, pulled Mary’s hair back and physically manipulated Mary. … Mary did not stop Banks’ conduct because Mary was fearful. Banks also insinuated that Mary was accidentally conceived, made fun of the performance and ridiculed [the song] in front of Mary, all in front of active cameras that were filming Mary. After the performance, Banks asked Mary to describe, in front of active and filming cameras, her opinion about Jane and her husband after they were publicly ridiculed by AGT. … As a result of her negative experience from AGT and Defendants’ abusive treatment, Mary was traumatized and became deeply depressed.