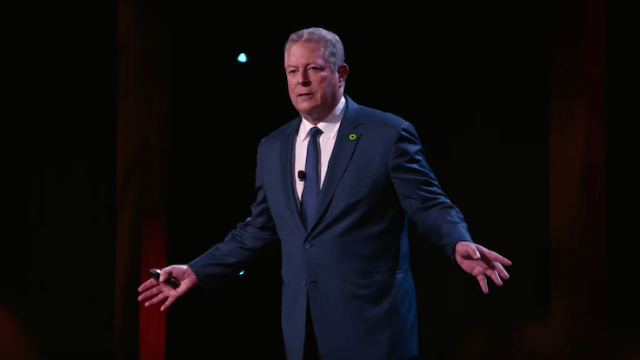 Al Gore is back with 'An Inconvenient Sequel,' and he's madder than ever about climate change.

Al Gore is sick of your excuses.

The former vice president's 2006 documentary about climate change, An Inconvenient Truth, scared us silly with its dire predictions about the fate of our planet. More than a decade later, Gore sees reasons to be optimistic, thanks to a surge in renewable energy and environmental treaties like the Paris Agreement.

But, he says in the trailer for his follow-up film, An Inconvenient Sequel, it's not enough. We see him watching, with a mixture of anger and disbelief, clips of Donald Trump denying the realities of global warming and promising to demolish the EPA. "The next generation would be justified in looking back at us and asking, 'What were you thinking?!'" Gore yells to his own audience.

And, he adds in a defiant moment: "Don't let anybody tell you that we're gonna get on rocket ships and live on Mars. This is our home."