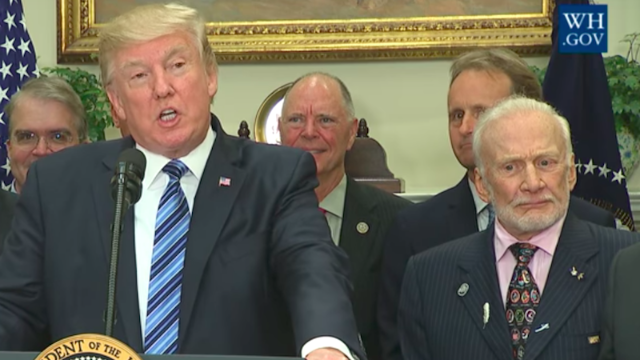 When you're 87-year-old Buzz Aldrin, the beloved and world-famous astronaut who set foot on the moon just moments after Neil Armstrong did, standing around next to Trump for a photo-op must feel like a waste of your time and talents. But, being the good sport he is, Aldrin was on hand at the White House on Friday as Trump signed an executive order to revive the National Space Council—a document Trump himself didn't seem to understand at all.

"We know what this is, space. That’s all it has to say, space," he remarked meaninglessly as he opened the folder to sign it. "There's a lot of room out there, right?" At which point Aldrin, quoting his namesake Buzz Lightyear from the 1990s children's movie Toy Story, presumably in an effort to get on the president's mental level, said: "Infinity and beyond." Cue laughter.