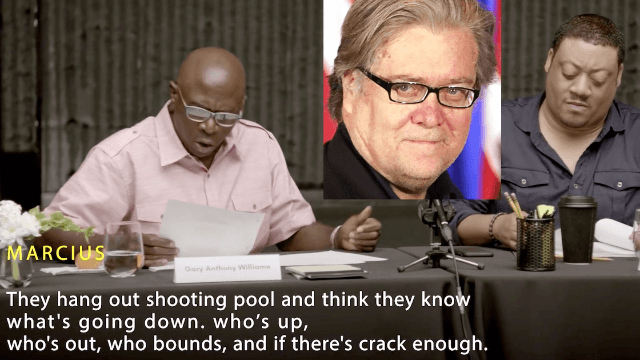 Actors staged a reading of Steve Bannon's long-lost hip hop musical and It. Is. Bad.

In the late 1990s, almost two decades before Steve Bannon would become one of the closest advisers to the president (and then get fired), he was just a lowly Goldman Sachs banker-turned-Hollywood executive producer. In those heady days, he and screenwriter Julia Jones collaborated to write their magnum opus, a hip hop musical adaptation of Shakespeare's Coriolanus set in South Central Los Angeles during the 1992 riots. They called it The Thing I Am.

If that sounds like something you definitely want to see, you're not alone. The project never saw the light of day (damn Hollywood elites), but since Bannon's rise as one of the most powerful voices in the government, people have been clamoring to read The Thing I Am. Who wouldn't be curious to read a Shakespearean drama about black gang members written by the founder of Breitbart News, a white supremacist blog?