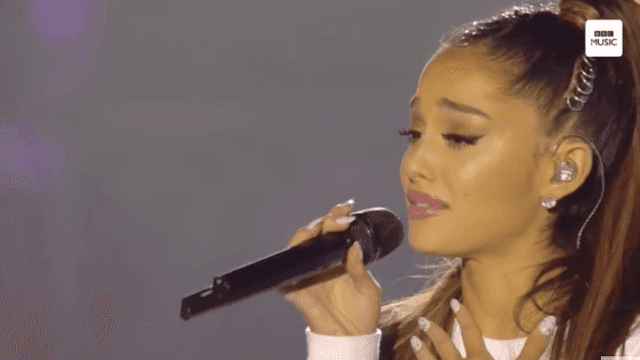 On Sunday, Ariana Grande performed at One Love Manchester, the benefit concert she put together to raise money for victims of the horrific bombing that occurred at the end of her May 22 concert in Manchester. According to Variety, the concert, which included guests like Katy Perry, Miley Cyrus, Pharrell, and Justin Bieber, raised, $2.6 during the three hours of the performance alone (a total of $12.9 million has been raised so far).

For the concert finale, Grande performed "Somewhere Over the Rainbow," breaking down into tears during one part of it (totally understandable). But she finished the song, and good luck not crying a bit yourself when you watch. Or just go ahead and cry, it's totally fine.

Before the concert, Grande spend some time at Royal Manchester Children's Hospital, visiting some of the victims of the attack. She could not have made her fans happier. So much love for Ariana.