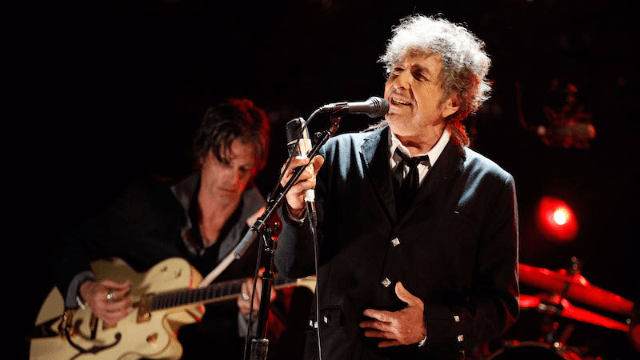 At long last, Bob Dylan has finally accepted his Nobel prize. Months after the announcement he barely acknowledged, the ceremony in December which he didn't attend, the 75-year-old singer-songwriter received his award at a small gathering Saturday afternoon (April 1), Billboard reports. The venue for the intimate ceremony was the hotel next to the conference center where Dylan was playing later that night. (I'm sorry that is the saddest sentence I will write today.)

But apparently, the ceremony was exactly what Dylan wanted. Klas Ostergren, a member of the Swedish Academy, told the AP, "it went very well indeed." The only attendees were members of The Academy and one of Dylan's staff members, which was "in line with the singer's wishes."

When Dylan first ignored, then later refused, his invitation to attend the ceremony in Sweden and accept his prize, the Nobel committee’s chairman called him “impolite and arrogant," but it could be that Dylan is just a shy, awkward dude. Of course, he made the whole thing a bigger deal by refusing to act normally about the award, thereby creating more attention than he would have by simply attending. (But then we probably wouldn't have had that moving tribute by Patti Smith.)