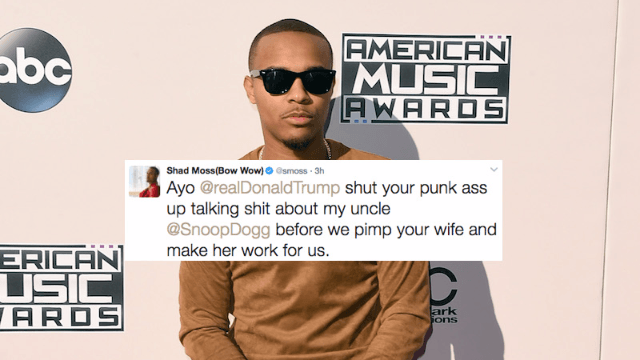 Bow Wow's response to the Snoop Dogg/Trump beef has everybody shaking their heads.

This morning, Donald Trump tweeted angrily about Snoop Dogg's latest music video. In it, "Snoop Dogg pulls out a fake gun and aims it at [a] Parody Trump," Billboard reports. And while the video was quite emphatically denounced for its violence across the board, there was one Snoop ally who attempted to come to his rescue: Bow Wow. "Attempted" being the operative word there:

Ayo, RealDonaldTrump, shut your punk ass up talking shit about my uncle Snoop Dogg before we pimp your wife and make her work for us.

Yeah, not exactly the clap back we were hoping to see. It invokes rape, fighting back against Trump's anger with threats of violence,—which we all know is not how to work shit out. (Though verbal insults aren't necessarily the best, either, if we're being honest).