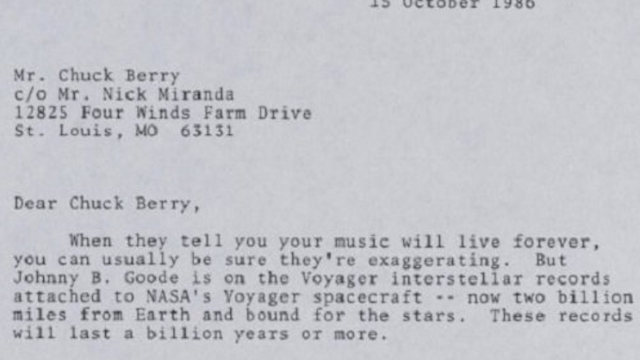 Carl Sagan's touching letter to Chuck Berry has everybody sobbing.

With the news that rock legend Chuck Berry died yesterday at the age of 90, the internet has been reflecting on his contributions to American music. One such reflection came in the form of a letter that Carl Sagan and Ann Druyan (his wife and co-creator of Cosmos) sent to Berry on his birthday back in 1986.

In the letter, Sagan and Druyan wish Berry a happy birthday and reflect on the fact that a phonograph record of Berry's 'Johnny B. Goode' had been placed aboard the Voyager spacecraft when it launched in 1977, as part of the Voyager Golden Records project. "When they tell you your music will live forever, you can usually be sure they're exaggerating," the couple begins. "But Johnny B. Goode is on the Voyager interstellar records attached to NASA's Voyager spacecraft -- now two billion miles from Earth and bound for the stars. These records will last a billion years or more."