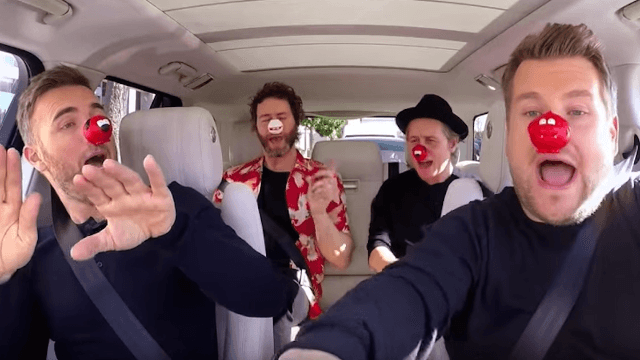 James Corden gets emotional as one of his favorite bands join him for Carpool Karaoke.

James Corden often breaks the internet with his popular late-night segment Carpool Karaoke, but now he is trying to "break America" by introducing them Britain's "biggest man-band," Take That.

Take That band members Gary Barlow, Howard Donald and Mark Owen crossed the pond to join Corden in Los Angeles for this special edition of Carpool Karaoke that benefits UK's Red Nose Day. From discussing tea preferences to full English breakfasts, this is the British-est Carpool Karaoke ever.

Although Take That has been popular in the UK for decades, they are relatively unknown to American audiences. James Corden decided to remedy this by taking to the streets with the band to distribute free CDs and put on an impromptu concert with full choreography.