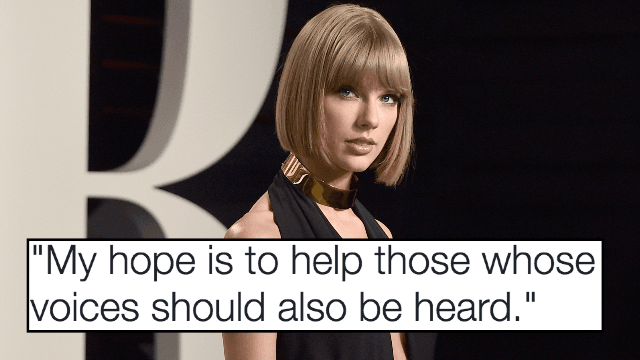 After four days of giving testimony in a Denver courtroom, Taylor Swift has won her trial against DJ David Mueller, who groped her bare rear end during a 2013 meet-and-greet. As reported by E! News, the jury found him guilty of assault and batter against the pop star, and she will be awarded a symbolic $1.

Shortly after the verdict was announced, Taylor Swift released a statement to E! and other outlets, thanking the jury, her lawyers, and everyone who has supported her during this ordeal.

I want to thank Judge William J. Martinez and the jury for their careful consideration, my attorneys Doug Baldridge, Danielle Foley, Jay Schaudies and Katie Wright for fighting for me and anyone who feels silenced by a sexual assault, and especially anyone who offered their support throughout this four-year ordeal and two-year long trial process.

In her statement, she also recognized that she was able to counter sue Mueller because of her economic fortune, and she plans to put that to good use by continuing to support victims of sexual assault.