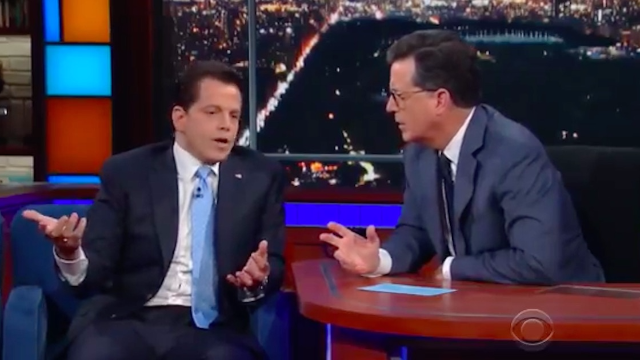 Anthony Scaramucci went on 'Colbert' and compared himself to Arya Stark.

Former White House communications director Anthony "The Mooch" Scaramucci, was a guest on the Late Show on Monday night, where he told host Stephen Colbert that if it were up to him, Steve Bannon would be fired from the White House. He also admitted that Steve Bannon probably could not suck his own dick, unless he was taking hot yoga classes or something, and clarified that he himself can't do it either.

Colbert and Scaramucci covered a lot of topics in their 13 minute interview, which started with Scaramucci comparing himself to Game of Thrones' Arya Stark (he joked that he had a kill list of Colbert's writers). Among the topics discussed were whether Steve Bannon should be gone from the White House (Mooch said he should), Donald Trump's response to the Unite the Right rally in Charlottesville (the condemnation wasn't strong enough), whether Trump ordered a spine from Amazon Prime, Donald Trump's "huge" sacrifice in taking the role of the presidency, and what a compassionate man Trump is (siiiiiiigggghhhhh).