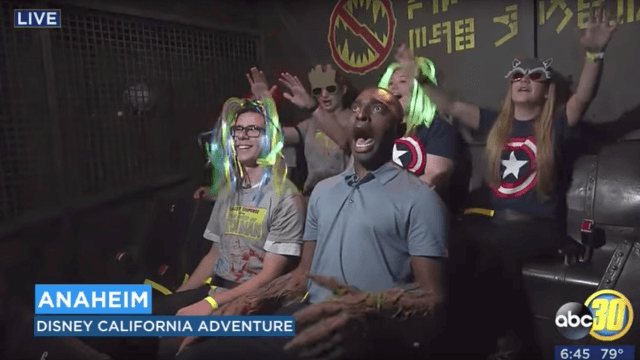 Reporter tests out Disneyland's new 'Guardians of the Galaxy' ride on live TV. He was not prepared.

We were pretty bummed last summer when Disneyland announced that it would be changing its classic and much beloved Tower of Terror into a ride featuring characters from its popular Guardians of the Galaxy films, but this video almost makes us forgive them for it.

You see, the new ride, Guardians of the Galaxy - Mission: BREAKOUT!, just finished renovations and will open to visitors at Disneyland's California Adventure on May 27. To celebrate, Disney invited some media outlets for a special first-look at the new attraction. Local SoCal news station ABC 30 sent one of its reporters, a man by the name of Cory James, to the park to test out the ride. On live TV.

Apart from the addition of Guardians of the Galaxy storylines and characters, the new ride is essentially the same as Tower of Terror. Guests are seated in a gantry lift that goes up and down at random, giving riders a free-fall sensation.