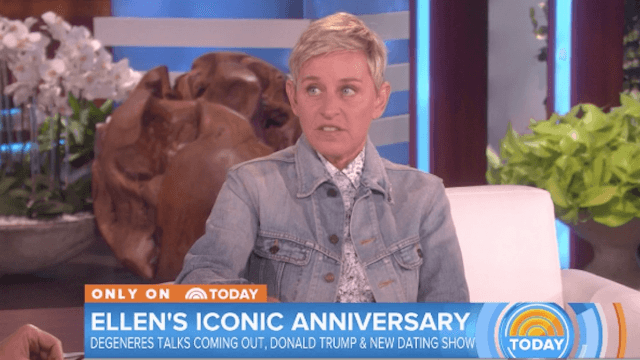 Here's why Donald Trump won't ever be on Ellen DeGeneres' show.

On Thursday, Matt Lauer was a guest on Ellen DeGeneres' show. But after he was done being her guest on the show, he flipped the tables (not the side table always containing someone ready to jump out at you, though) by sticking around, studio audience and all, and interviewing Ellen for a while.

In their conversation, Lauer asked Ellen about coming out 20 years ago—how it affected her life, and her work. He also asked her about Donald Trump, and she revealed that she'd met him when her show was just starting out, she did something with Celebrity Apprentice, but that she hasn't talked to him since he started his run for the presidency. Lauer wondered if she'd like to have Trump on her show, and her answer was simply, "no," met with cheers from her audience.

Lauer asked her why not, and she explained: