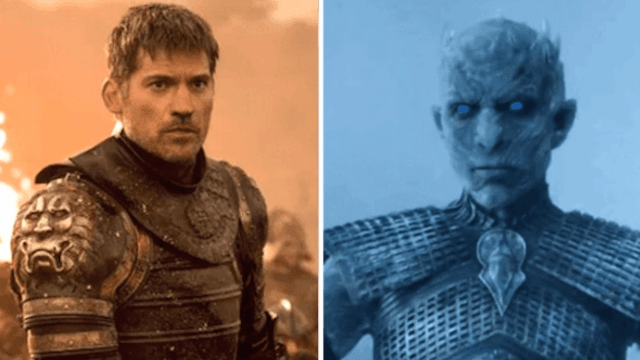 'GoT' fan has a poetic theory on why Jaime Lannister will kill the Night King.

BEWARE: SPOILERS! Although, really, if you haven't caught up at this point and you get a spoiler, you have no one but yourself to blame.

While we wait for the return of our beloved Game of Thrones, we have a lot of time to come up with theories—about characters, deaths, night walkers, possible alliances…everything. Why focus on our own lives when theirs are so much more interesting?

Reddit is the home of so many good theories, including this one about how it will be Jaime Lannister who kills the Night King. Redditor Adjace-esque posted his hypothesis, with supporting arguments. Take a look.

I apologize if this has been theorized before, but it's a thought that just occurred to me.

In both the books and the show, Jaime has the ultimate redemption arc. He begins as a disgraced knight--feared for his prowess and his family's power, but considered dishonorable because he killed Aerys.

As of the season 7 finale, he's riding north.

Key piece of evidence #1 -- Jaime tries to run Daenerys through

What an interesting scene that was. Interesting because it didn't really accomplish anything. It didn't forward the plot anymore than showing Bronn & Jaime escaping the fray. You could argue its purpose was a shock moment, to make people think Jaime would drown, but it wasn't very convincing.

I think it was intentionally planted. The scene established a character trait -- Jaime is willing to ride into harm's way (literally into the dragon's maw) if he thinks he has a shot at taking out the enemy leader and ending the war in one stroke. Killing the Night King is the literal adaptation of that.

There's no way he thought he was getting out of that situation alive. Even if he ran Daenerys through with his spear, the dragon was right there and would have killed him. Yet he was willing to do it, because he thought killing Dany and ending the insurrection was worth his life. He was seeking a noble, heroic death.

EDIT: As pointed out by u/NameThatHasDerpInIt, at the Battle of the Whispering Wood, Jaime is said to have cut down a dozen men in an attempt to get directly at Robb, to try to end the war right there on the spot. So this whole sacrifice yourself to try to take out the enemy leader thing is an established Jaime trait. And conveniently our story now has an enemy leader whose death would quite literally end the war...

Martin loves clever wordplay and unexpected foreshadowing. Imagine if Jaime slays the Night King. He is, again, the Kingslayer--but this time he's the hero. Martin could joke "I told you he was the Kingslayer in Book One, and you're shocked he killed the King at the end?!" (I mean, he's technically a hero for stopping Aerys from blowing up King's Landing, but no one acknowledges that as such.)

Wouldn't killing another evil king, except this time everyone thinks it's heroic, be the ultimate end to his story? His honor was destroyed and then redeemed by killing kings.

He can still get mortally wounded and die in the arms of the woman he loves, as he foretold in the show.

And as for the valonqar -- maybe it's not a literal death, but the fact that Jaime's noble sacrifice ends the White Walker threat and catapults the Dany/Jon alliance to power, overthrowing Cersei and taking away the last things she held dear (Jaimie who is now dead, and her political power in one move). I do admit though that the valonqar is the weakest aspect of this theory.

I dunno, I think it kind of makes sense.