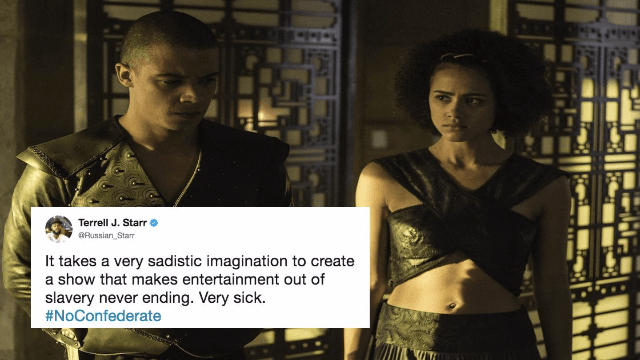 You're going to see lots of #NoConfederate tweets during 'Game of Thrones.'

Ever since it was announced that the two white men who showrun 'Game of Thrones' have created a show called 'Confederacy' for HBO, potential viewers have been voicing their dissent. The show would embrace an alternate history where slavery never ended, much to the rage of everyone from eggs on Twitter to notable television critics.

Tonight, you'll likely be seeing the evidence of that protest on Twitter. As Refinery29 reports, April Reign, ReBecca Theodore, Shanelle Little, Lauren Warren, and Jamie Broadnax created the hashtag #NoConfederate to let HBO know how 'Game of Thrones' fans — ostensibly the same audience they want to capture for the new drama — feel about 'Confederacy.'

"The goal is to tell HBO that there are many people who think the show Confederate is a bad idea and they should not spend any more time, energy, or money on it," Reign told Refinery29. "Tonight at 9 p.m. EST, and again at 9 p.m. PST, during Game of Thrones, we are asking everyone to use the hashtag so HBO can see the power of social media," she said.