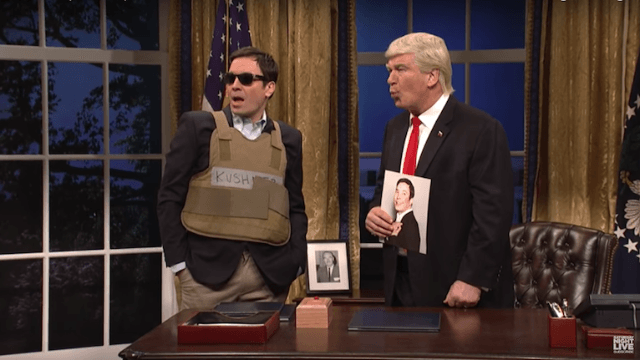 Last night on SNL, Jimmy Fallon returned to host the show and appeared in the cold open as the preppy, appeasing, and recently-appointed son-in-law of the President, Jared Kushner. And after Kushner received the meme treatment for showing up to an Iraq war zone looking like he stepped out of a J. Crew catalog, naturally Fallon showed up wearing the exact same thing.

But wait, the sketch gets even better. Because Trump brings in both Bannon and Kushner to let them know that only one of them will remain as his top advisor, America's Next Top Model-style. The ultimatum in the sketch comes just shortly after actual news that Bannon may be getting the boot, after being formally demoted and otherwise reprimanded by the president. In the sketch, the lights go dim and suddenly Trump takes on the rhetoric of the hit reality show's host, Tyra Banks.

"If you do not see your photo, you must immediately leave the oval office and join Kellyanne Conway in the basement," Trump-as-Tyra says.