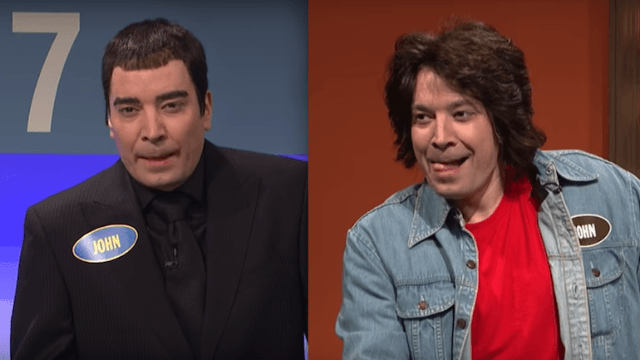 "Celebrity Family Feud" returned to SNL again last night, but this time with a twist: time travel. That means that stars from the 1970's were playing against stars from 2017. "Now, you probably asking yourself, 'how the hell did this time travel thing happen,'" Steve Harvey says to the audience. "And here's my answer: I don't know." But that is the beauty of comedy: it don't need explainin'.

Harry Styles, the musical guest for the episode, showed up in this sketch as a shaky Mick Jagger from the 70's and made fun of himself a little bit by saying (in character) that it's a bad idea to leave a band to make solo records (something that Styles is currently doing, as he stepped away from his band One Direction). But the focus of the sketch is on Jimmy Fallon, who is tasked with playing both young John Travolta (who is basically just Danny from Grease and keeps talking about Sandy) and modern-day John Travolta (who is very vaguely spiritual, but clearly being held hostage by Scientology).