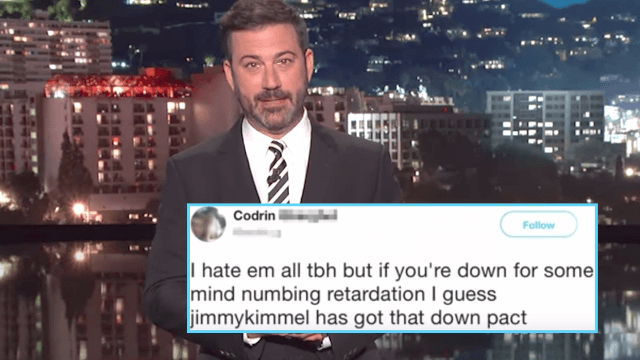 On Tuesday, Jimmy Kimmel triggered Trump supporters everywhere by suggesting that maybe, just maybe, they should stop supporting a president who just delivered a passionate speech about defending white supremacists and neo-Nazis.

In the monologue, Kimmel tries to find common ground with Trump supporters, saying that he can understand why a dark horse candidate like Donald Trump would appeal to some people at first, but now it's time to hang up the ol' MAGA hat and admit that the electing him was a mistake. In the end, Kimmel jokingly suggests we make Donald Trump the first "King of America," that way he still thinks he's important, but he has no actual political power.

Well, those still riding the derailing "Trump train" did not take Kimmel's words kindly, and let the late night show host know from the safety of behind their computer screens. On Wednesday, Kimmel decided to do a solo rendition of his famous "Mean Tweets" segment and read some of the criticism on air.