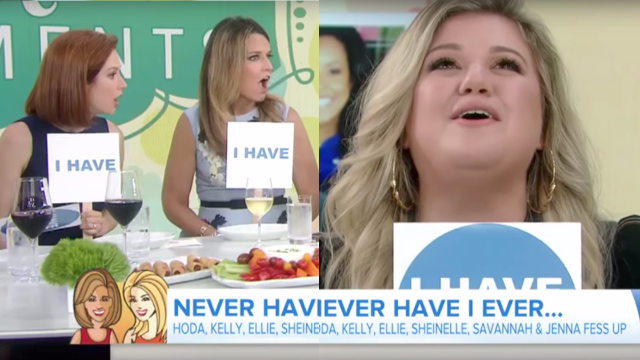 Kelly Clarkson accidentally brought up sex toys on live TV. It was awkward.

Live TV is risky enough as it is, but throw an unpredictable game live "Never Have I Ever" into the mix, and you never know what's going to happen. Singer Kelly Clarkson found that out the hard way when she guest co-hosted the Today Show's fourth hour alongside Hoda Kotb.

Clarkson and Kotb were joined by Ellie Kemper, Savannah Guthrie, Sheinelle Jones, and Jenna Bush Hager for a special mom edition of the classic party game. The questions were all related to parenting, such as, "Never have I ever pretended to be sleeping so my partner would take care of the kids." But there was one question that Kelly Clarkson got a little hung up on.

At one point during the game, Kotb asked the panel if they had ever "'misplaced' a noisy toy." She was of course referring to children's toys, but Clarkson thought she meant a different kind of, ahem, play thing. She breaks down into a fit of embarrassed giggles before managing to get out, "I thought you meant a different kind of toy." That's when the entire panel erupts into giggles. (How could you not?)